Are end users aware of and ready to accept ADAS systems?

As it is widely known in the automotive industry, ADAS systems are meant for warning drivers about potential dangers that arise on the roads. The system triggers the driver’s attention about possible crashes and unintended lane deviation. But what is the real aim of these devices? It’s first and for most to increase drivers’ safety and decrease the risks of collisions by warning distracted drivers before the worse takes place.

Hardware and software companies who develop and produce ADAS devices and even OEMs seem to be focusing and putting all their energies into the development and improvement of the technology itself letting the driver who is the main actor aside from their strategy equation. The truth of the matter is the majority of the general public is still unaware of the existence of the so called ADAS system and their benefits. The gap between the development of ADAS systems and the awareness of the customers about them is so big that the great majority of visitors of big high-tech shows such as CES have no idea about ADAS devices and their functionalities.

The current situation created a certain fear and resistance toward ADAS systems specifically and AV in general all resulting from the lack of their familiarity and knowledge about the technology and how it could actually improve their own and the general road safety.

A study conducted by the AAA Foundation for Traffic Safety in September 2018 about the vehicle owners experience with ADAS revealed results which prove that drivers are not aware about the ADAS systems. In this survey, 46% of the respondents revealed that they are not sure if their vehicle has the FCWS, 48% were not aware that their car had the LDWS, and 51% were unaware of the presence of Rear Cross Traffic Alert system in their vehicle. The results of the AAA Foundation for Traffic Safety illustrate the lack of OEM’s efforts in stressing the importance of ADAS safety features to their customers (Figure 1). 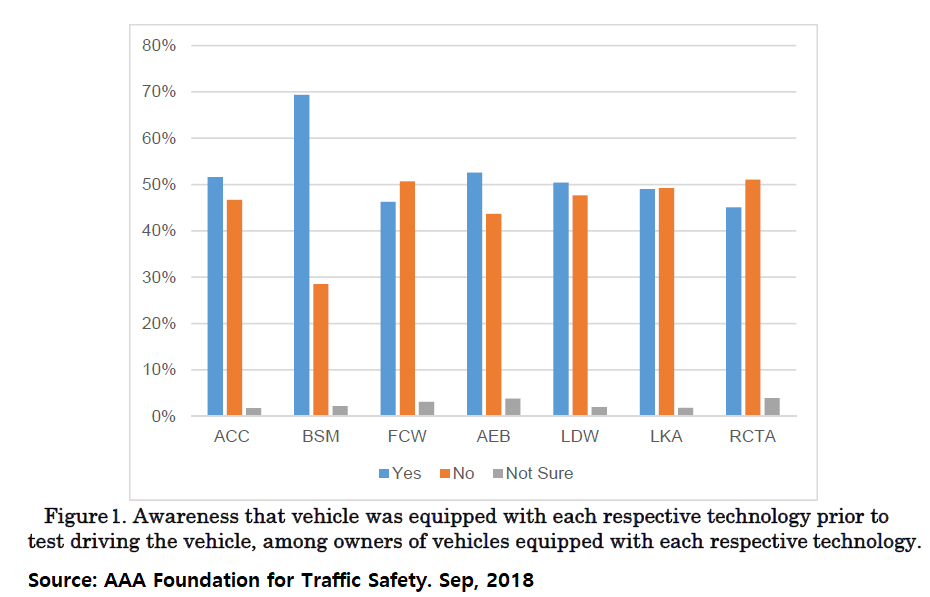 The same study showed that drivers get their knowledge and information about ADAS technology and functionality from three main resources; user’s guide, learning by trial and error, and the dealership. And even with the information received from these three sources a great percentage of the respondents were not fully knowledgeable about the functionality and limitations of each ADAS system integrated in their vehicle. For example, respondents were not aware of the face that if the turn signal is activated, LDW will not work.

Therefore; it’s safe to say that the majority of the automotive industry is still unaware of ADAS technology and its advantages. The reason behind this phenomenon is simply the lack of OEMs’ stress and communication about it. Customers should be given knowledge and by so they would be willing to pay for the ADAS systems that come with the vehicles and as a result also influence the aftermarket in adopting ADAS system in vehicles which are equipped of the technology. As the study shows, drivers do not seek information about their cars on internet but they are expecting the information to be provided by the OEM or by the dealership. Efforts should be done on all levels of the industry starting with the system developers and passing by the OEMs and dealerships.